Let me explain the Drake vs. Meek Mills feud with images, so you see what’s going on… 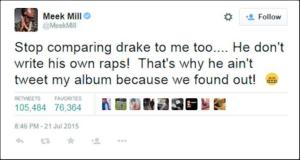 On July 21st 2015, Meek Mills thought it was a “great” idea to go on a Twitter spree and posted tweets about Drake.

Drake finally found out what was going on with Mill’s tweets, and dropped “Charged Up” (the 1st diss track).

This is Meek’s response to the video “Charged Up”.

4. Well, its safe to say that Drake wasn’t going to let Meek Mills have the last say when he released this:

If there’s a manual on “How to ruin someone’s career with one song”, Drake could be the perfect author. In a matter of minutes of that song being posted on Soundcloud, the memes and gif were flooding in…

So, if you want to start on someone else, make sure they don’t return it back 10x as hard.

All sources are from various twitter accounts and websites.